One of the iPig’s advantages is surely the fact that it works with any kind of Internet connection and requires no configuration of any kind. By starting any application that connects to the Internet, such as a web browser or an instant messaging client, iPig intercepts the traffic and securely tunnels it.

The software runs on Windows 2000, Windows XP and Windows 2003 and works with major firewall software applications including ZoneAlarm and Norton Internet Security. 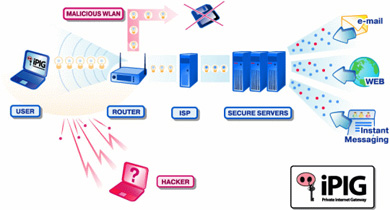 As you can see from the image above, the iPig interacts with iOpus “secure servers”, which is not an option for a number of security conscious wireless users. In this case, you can join the beta testing of iPig Server, server side software that willo give you the possibility of doing the whole iPig usage process in-house The iPig Server Express Edition for up to 5 users is freeware. After the final version gets released, all active beta testers will receive a free Pro Edition, which allows an unlimited number of users.