Kaspersky Lab has discovered the first virus designed to infect iPod portable media players. The virus, which has been named Podloso, is a proof of concept program which does not pose a real threat.

The virus is a file which can be launched and run on an iPod. It should be stressed that in order for the virus to function, Linux has to be installed on the iPod. If the virus is installed to the iPod by the user, the virus then installs itself to the folder which contains program demo versions. Podloso cannot be launched automatically without user involvement. 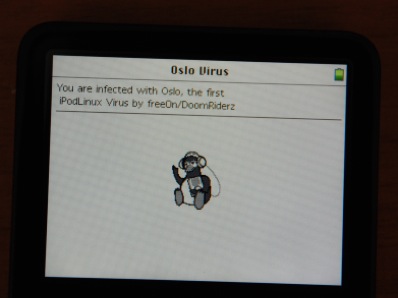 Once launched, the virus scans the device’s hard disk and infects all executable .elf format files. Any attempt to launch these files will cause the virus to display a message on the screen which says “You are infected with Oslo the first iPodLinux Virus”.

Podloso is a typical proof of concept virus. Such viruses are created in order to demonstrate that it is possible to infect a specific platform. They do not have a malicious payload. Additionally, Podloso is unable to spread. The user has to save the virus to the iPod memory for the device to become infected. Podloso has no malicious payload, and does not present a real threat; it simply demonstrates that it is, theoretically possible to create malicious programs for such devices.