The 2008 Identity Fraud Survey Report – released by Javelin Strategy & Research – confirms that identity fraud is declining in most parts of the United States, and that fraudsters are turning to unexpected channels to commit fraud. This year’s report reinforces a three-year trend that criminals mostly obtain the majority of information from stolen personal belongings, and through telephone calls, rather than online. For the first time, a key new finding identifies California and Illinois among five states whose residents are most at risk of identity fraud. 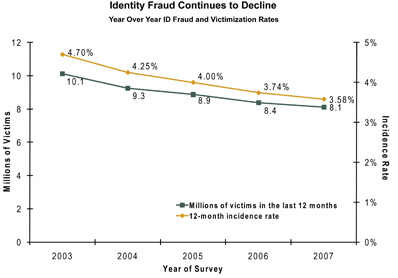 Now in its fourth consecutive year, the comprehensive survey is independently produced by Javelin Strategy & Research. It is the nation’s longest-running study of identity fraud, with more than 19,000 respondents participating during the past four years. Identity fraud is defined as the unauthorized use of another person’s personal information to achieve illicit financial gain. In October 2007, more than 5,000 telephone interviews with consumers identified important findings about the reduction of fraud while at the same time highlighting new areas of concern for Americans.

Continued Decline of ID Fraud, But Per Consumer Cost Up

The annual cost of identity fraud in this year’s report dropped by nearly 12 percent over the previous year, from $51 billion to $45 billion. These figures represent the total amount that criminals were able to obtain illegally, before detection.

Factors that contributed to this decline include greater consumer vigilance and awareness, improvements in systems and practices by companies that manage personal information, the increased frequency of viewing personal account information, and consumers more frequently updating spyware and anti-virus software. As businesses and consumers work together to protect sensitive data by responsibly adopting online financial services, such as online banking and bill paying, Javelin expects the fraud reduction trend to continue, although at a slower pace than in the past.

A troubling trend was identified in 2007. Over the past three years, overall fraud declined, while the cost per consumer rose. This cost is defined by the total out-of-pocket expense consumers incur when falling victim to ID fraud, not those costs borne by businesses. The cost per consumer in 2007 averaged $691, an increase of 25 percent, over the $554 recorded in 2006.

Criminal Activity in the Phone Channel

The most significant new avenue for theft of information in 2007 was the ubiquitous telephone channel, which saw a sharp rise in incidents. Access through mail and telephone transactions rose from 3 percent of theft in 2006 to 40 percent in 2007. The dominant method used by fraudsters in this channel was vishing, a technique in which criminals use telecommunications, voice over Internet protocol (VoIP) and other technologies to obtain information from consumers. As consumers shift more financial transactions to secure online arenas, fraudsters have become more creative in utilizing traditional telephones, both land lines and wireless, to access information. Unsuspecting consumers receive phone calls from parties claiming to represent non-profit organizations, billing institutions or other financial institutions. Far too many of these consumers provide the callers with personal financial information such as Social Security numbers, bank account numbers and credit card numbers, which are then used by criminals for fraudulent activity.

For the first time, Javelin reported regional fraud incidence rate statistics. On average, New England and the Plains States reported the fewest incidents of fraud per capita. But five states were well above the national average for fraud when compared on a percentage basis to other states across the country. Respondents in California, Illinois, Idaho, West Virginia and Delaware reported the highest incidence of ID fraud. Generally, states with dense metropolitan areas such as California are more likely to have higher fraud rates, due to higher income levels and commerce activity.

Respondents between the ages of 18 and 24 who reported falling victim to ID fraud in 2007 were the most likely group of consumers to put fraud alerts on their credit reports, with 67 percent acknowledging that this as an immediate first step. Of this age group, 47 percent purchased identity fraud insurance, nearly three times the rate as any other age group polled.

Older adults, commonly considered a leading demographic group preyed upon by criminals, have learned from ID prevention campaigns urging Americans to move financial transactions to more secure methods, such as online. Respondents aged 65 and older who fall victim to ID fraud are now the least likely to send checks through the mail, one of the most common methods criminals use to obtain personal financial information. Technologies such as online banking and bill payment continue to prove effective as methods for preventing ID fraud.