The Deskstar 7K1000.B provides an exceptional blend of power efficiency and performance, making it an ideal solution for power-friendly consumer and commercial PCs. The new three-disk design improves idle power consumption up to 43 percent over its 1TB predecessor, which was already among the industry’s most energy efficient hard drives. Hitachi is also shipping the Deskstar E7K1000, designed to provide high-capacity storage for low-duty-cycle, 24×7 applications. 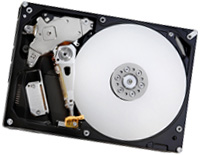 The new 7,200 RPM, 3.5-inch drives are available in a range of capacities from 160GB to 1TB. The drives are built using Hitachi’s proven and patented perpendicular magnetic recording (PMR) heads and disks, delivering a maximum of 375GB of storage per disk with a high level of reliability.

The Deskstar 7K1000.B also features optional Bulk Data Encryption (BDE) for hard drive-level data security. Previously, data on a hard drive could be protected either through software-based encryption or a system-level password. However, hard drive-level encryption provides improved performance and a higher level of security than any of the previously available options.

When employing bulk data encryption, data is scrambled using a key as it is being written to the disk and then descrambled with the key as it is retrieved. Thus, data encryption at the hard-drive level represents a more sophisticated approach of securing users’ data and is generally considered to be virtually impenetrable. The Deskstar 7K1000.B uses an Advanced Encryption Standard (AES) that has been certified by the National Institute of Standards and Technology (NIST) to deliver the strongest commercially available data security protection1. Only hard drives that have received this certification are eligible to be used by the U.S. government for national security applications.