The Open Security Foundation (OSF) announced that the DataLossDB will be formally maintained as an ongoing project under the OSF umbrella organization as of July 15, 2008. 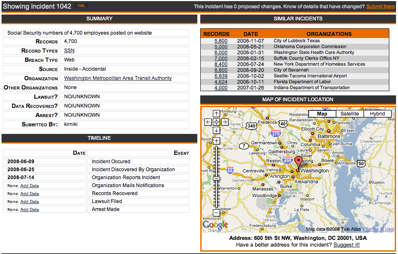 Attrition.org’s Data Loss project, which was originally conceptualized in 2001 and has been maintained since July 2005, introduced DLDOS to the public in September of 2006. The project’s core mission is to track the loss or theft of personally identifying information not just from the United States, but across the world. As of June 4, 2008, DataLossDB contains information on over 1,000 breaches of personal identifying information covering over 330 million records.

In an effort to build off the current success and further enhance the project, the new relationship with OSF provides opportunities for growth, an improved data set, and expanded community involvement.

The Open Security Foundation’s DataLossDB will be free for download and use in non-profit work and research. The new website launch builds off of the current data set and provides an extensive list of new features.