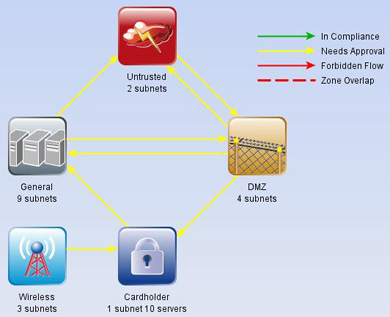 RedSeal SRM 3.0 can identify all network traffic that is allowed between untrusted networks, the DMZ and the cardholder data network as required by PCI-DSS Requirement 1. While enterprises have traditionally focused on manually reviewing their firewall policies, RedSeal SRM 3.0 goes beyond these measures and determines all traffic allowed between any two points. Enterprises no longer have to attempt to manually determine the effects of their firewall policies, and can instead focus their efforts on understanding exactly where they stand in addressing PCI-DSS Requirement 1. Additionally, a PCI-DSS Requirement 1 compliance report can be generated and used for sharing the results of the assessment with the enterprise’s Qualified Security Assessor (QSA).