Sophos is warning music fans to be wary of opening unsolicited emails claiming to reveal the latest news about their favourite pop stars. The warning follows the discovery of a new wave of malware attacks which arrive in the unsuspecting computer users’ inbox and claim to contain a link to a scandalous video of Madonna. 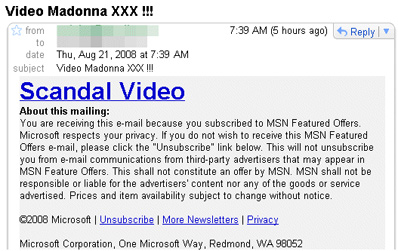 Sophos experts note that the cybercriminals have timed the attack to coincide with the start of Madonna’s new world tour on Saturday – it is a common tactic for hackers to try to exploit excitement around upcoming events.

However, users that click on the URL will not see a video of Madonna but will instead download a Trojan horse called Troj/FakeVir-EW that displays a bogus security warning encouraging them to purchase a piece of fake anti-virus software.