Elections in United States are approaching, and spammers continue to leverage election topics to lure users into opening messages. Secure Computing’s Research Team published a report containing the candidates’ popularity among spammers in October. As was noted, we found that, largely due to a spam surge early in the quarter, Senator Obama has been winning the spam polls with a 6-to-1 lead over McCain.

After a surge on September 3rd, the spam race between the two presidential candidates has narrowed but remains biased towards Obama, who has maintained a minimum 10-point lead on most days. After the second presidential debate on October 7th, Obama again gained popularity among spammers, and over 80% of election-related spam currently bears his name.

Whose spam to you prefer? 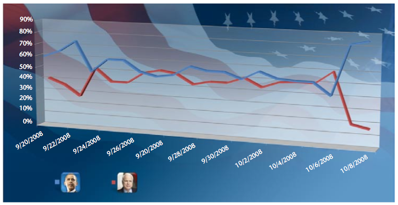