The crack application then requests an administrator password, launching the backdoor with root privileges. This copies the executable to /usr/bin/DivX, then creates a startup item in /System/Library/StartupItems/DivX. The program checks to see if it has been launched with root privileges, then saves the root hash password in the file /var/root/.DivX. It listens on a random TCP port, and answers requests such as GET / HTTP/1.0 by sending a 209-byte packet, and makes repeated connections to two IP addresses.

Next, the crack application opens a disk image which is hidden in its resource folder, in a folder named .data, and proceeds to crack the Photoshop program, allowing it to be used. 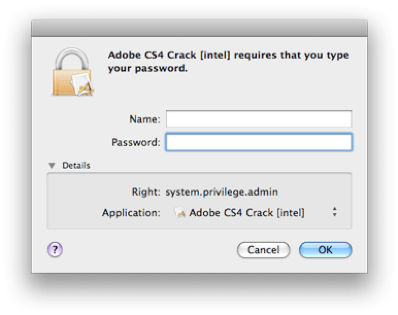 Since the malicious software connects to a remote server over the Internet, the creator of this malware will be alerted that this Trojan horse is installed on different Macs, and will have the ability to connect to them and perform various actions remotely. The Trojan horse may also download additional components to an infected Mac.

Intego is issuing this alert to warn Mac users not to download Photoshop CS4 installers from sites offering pirated software. (As of 6 am EST, nearly 5,000 people have downloaded this installer, according to a major BitTorrent tracker site.) Since the Trojan horse, in this case, is found merely in the crack application that is bundled with Photoshop CS4, users should avoid downloading any cracking software from sites that distribute pirated software. The risk of infection is serious, due to the number of infected users, and these users may face extremely serious consequences if their Macs are accessible to malicious users. The first version of this Trojan horse was seen downloading new code to infected computers, which were then used in a DDoS (distributed denial of service) attack on certain web sites. Since this new variant uses the same technology, and contacts the same remote servers, it is likely that it will attempt to download new code and perform such actions.

Intego VirusBarrier X4 and X5 with virus definitions dated January 25, 2009 or later protect against this Trojan horse. Intego recommends that users never download and install software from untrusted sources or questionable web sites. In spite of Intego’s security alert regarding the first version of this Trojan horse, and in spite of comments on torrent trackers, people continue to download these infected torrents. The iWork 09 torrent that we warned about on January 22 has been downloaded by at least 1,000 more people since our warning. This is why we consider this Trojan horse to be a serious risk.