According to data compiled during October by PandaLabs, Spain tops the bot ranking with 44.49% of all computers infected by bots. These programs, once they have infected a computer, allow hackers to take remote control of the system and carry out a series of actions including sending spam and downloading viruses, worms and Trojans, etc.

Next in the ranking, although a long way behind with 14.41%, comes the United States, followed by Mexico (9.37%) and Brazil (4.81%). Those countries least infected include Peru, the Netherlands and Sweden, all with ratios under 1%. 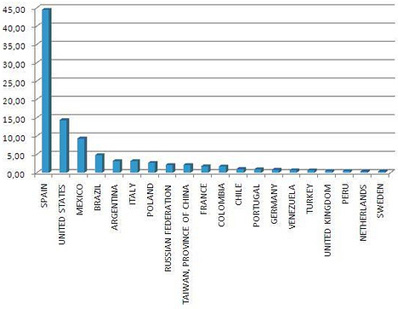 According to Luis Corrons, Technical Director of PandaLabs: “Along with rogueware, botnets and zombie computers have increased by more than 30% so far this year. This is the simplest way for a hacker to take control of computers to distribute spam or malware, therefore making it more difficult to trace and detect the real culprit. The problem is that owners of these zombie computers will be committing crimes without realizing, and could face having services withdrawn by their ISPs or even prosecution.”