Cisco today issued its Annual Security Report for 2009, which highlights the impact of social media, particularly social networking, on network security and explores the critical role that people, not technology, play in creating opportunities for cybercriminals. It also discusses trends in cloud computing, spam and overall global cybercrime activities that information technology professionals continue to face.

Social media experienced explosive growth in 2009. Facebook alone tripled its active user base to 350 million over the course of the year. Social media adoption is expected to continue growing into 2010, especially as more organizations realize the value of social networks as an absolute business requirement.

Social networks have quickly become a playground for cybercriminals because members of these sites put an inordinate amount of trust in the other members of their communities and often fail to take precautions to prevent the spread of malware and computer viruses. The report also provides more information on the potentially devastating combination of minor vulnerabilities, poor user behavior, and outdated security software that can dramatically increase risks to network security. 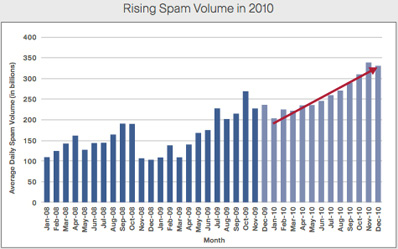 Spam: Social media may be where cybercriminals troll for new victims. However, spam is still a tried-and-true means for tricking people into downloading malware and persuading them to buy, for example, fake pharmaceuticals. The report estimates that in 2010, spam volume will likely rise 30 to 40 percent worldwide over 2009 levels. However, Cisco’s own SensorBase data shows that while the U.S. and other economic leader countries (such as those within the EU) begin to shut down spam zombies in their own countries, the rollout of broadband in developing economies (including India and Vietnam) have made them an increasing source of spam. In fact, the U.S. was toppled as the no. 1 spam sender. In 2009, that distinction went to Brazil.

Cloud Computing: While 10 years ago it would have been unthinkable for businesses to keep sensitive data outside the corporate firewall, today, with the advent of cloud computing and hosted applications, doing so is increasingly common. Many users are so trusting of cloud computing that they do minimal due diligence on who’s hosting their sensitive data, and how secure the data is. The report recommends that organizations looking to use externalized services ask providers to explain their data security measures thoroughly.

Cisco Cybercrime Return on Investment (CROI) Matrix: This year’s Annual Security Report marks the debut of the Cisco CROI Matrix, based on the Boston Consulting Group’s well-known “Growth-Share Matrix.” The CROI Matrix analyzes which types of cybercrime will be the “winners” and “losers” in 2010. Based on performance in 2009, the matrix predicts that massive banking Trojan Zeus and other lucrative and easy-to-deploy Web exploits will be more prevalent in 2010. Scareware, spyware, click fraud, advance-fee fraud and pharma spam will continue to be cash cows. The “wait-and-see” moneymakers include social networking exploits, like the Koobface worm, that are only now starting to make their mark.

Cisco Global ARMS Race Index: In an effort to track the overall level of compromised resources worldwide, Cisco has developed a Global Adversary Resource Market Share (ARMS) Race Index. Over time, the index will give a better picture of the online criminal community’s rate of success at compromising enterprise and individual activity. In 2009, the index rates the level of resources under adversarial control at 7.2, indicating that between 5 and 10 percent of personal computers are compromised.