According to information popping up in some online forums, an application that supposedly allows you to enter and search the FBI fingerprint database will be released in a few days. The application is heralded by some heavy online promotion on sites like YouTube.

The name of the application is “FBI Fingerprints Scanner” or a similar variant of the name, and Chris Boyd warns that it’s obviously a fake program created with the intention to deliver files to infect the user’s computer.

The application presumably uses “stolen” login credentials to allow you to enter the (fake) database. After logging in, the user is asked to upload an image of a fingerprint. As Boyd noticed, any image can be uploaded and will give a result: 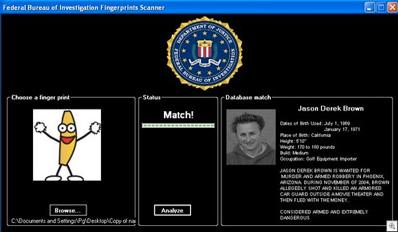 Enough to make the user suspicious. Also, the profiles that “match” the fingerprints are those contained in the FBI Most Wanted list. What are the odds that a random fingerprint or even your fingerprint matching that of a wanted murderer?

The application is yet to be released, but this is a good time to warn anyone that has a weakness for CSI techniques and “secret FBi tools”.