SecureWorks announced the findings of a research study that analyzed where the greatest number of attempted cyber attacks were launching from across the globe at its 2,800 clients. 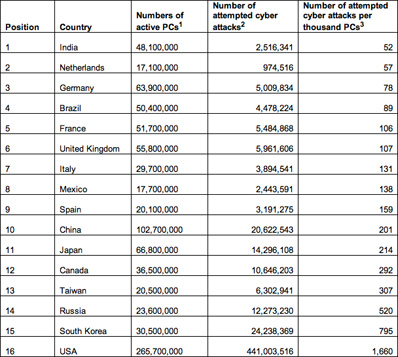 “The reasons for the difference in number of attempted attacks per country could comprise many things – this ranges from the overall Internet speeds in a country and how proactive the ISPs are in protecting their clients to general user education on security. The ratio of Windows, Mac and Linux users in a country will also make a big difference,” said Jon Ramsey, CTO for SecureWorks.

Don Smith, VP of Engineering and Technology, SecureWorks commented: “The result of a successful cyber attack on organizations can be dramatic and range from the loss of intellectual property, productivity and revenue to possible dented shareholder or consumer confidence in the event of disclosure.”

The SecureWorks study analysed the locations of attempted cyber attacks on its global client base between January 2010 and June 2010 and compared this with the total number of active PCs in that country. The countries with the top 16 numbers of active computers were then filtered to reveal standardized results.