The Yahoo email account of Bob Dvorsky, Iowa State Senator, has been compromised by unknown individuals who used it to send a variation of the “friend in need” scam email to his contacts, Softpedia reports.

The email in question reads as follows: 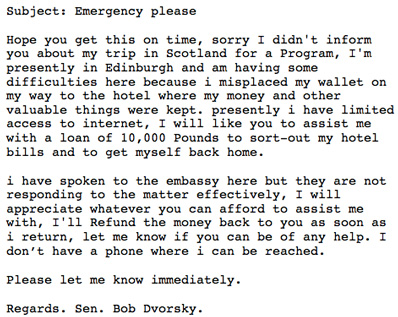 I hope and I believe that no one of his contacts has fallen for this scam – the idea that a U.S. Senator can be stuck in a foreign country because he lost his wallet is just laughable.

It seems to me that the Senator is lucky that the access to his email address has been used for mounting such an easy-detectable scheme and not for monitoring his private email communication.

Other politicians have not been so lucky. When email accounts of Alaska Governor Sarah Palin and South Carolina Governor Mark Sanford were compromised, their contents were made public.

According to an interview given to KCRG-TV9, the Senator says that he is fairly sure that his email password was stolen a couple of months ago, when he received an email claiming to be from a representative of Yahoo and asking for his password.

He believed the email to be legitimate and shared his password with the scammers that ultimately hijacking of the account.