A Trojan masquerading as an installer for well-known applications such as DivX, μTorrent, LimeWire, Avast! Antivirus and others has been popping up on users’ computers lately and is trying to get them to send an SMS to a premium number in order to “unlock” the application in question, says Microsoft. 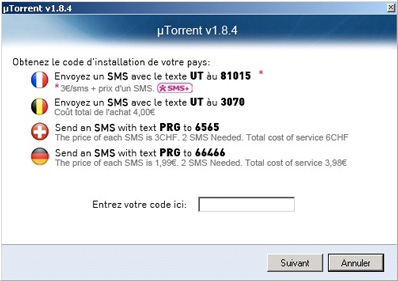 Somewhat similar to the “Ransom” Trojans that take control of the system by locking the user’s screen and unlocking it only after they enter the passcode they received upon sending a text message to the provided premium number, this Trojan is less disruptive, but still bent on taking your money.

The Trojan is distributed from a number of domains named after those programs. To avoid falling for these types of scams, users are advised to download software from the website of the developer or from reputable download sites.