If the title of the “Girl killed herself, after her dad posted This to her Wall” Facebook page sounds somewhat familiar, it is because almost two months ago the very same sentence came up popped up on many a user Wall, in connection with a supposed Trojan infection.

There must be something in the title that made a lot of impact, because here it is – trotted out for another scam.

The user sees it on a friend’s Wall, follows the link to the page, where a warning about possible inappropriate content pops up. After getting it out of the way, another pop-up window appears, in which the user has to prove that he is human and not a bot: 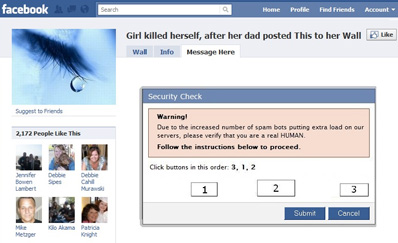 Unfortunately for him, this simple test is there to hijack his clicks and use them to post the unfortunate message on his Wall, in order to spread the scam further.

In the end, the user is asked to participate in one of several surveys offered so that he is finally allowed to access the content he wanted to see. But, tough luck, the only thing that will actually happen if he does complete a survey is that the scammers will try to make him sign up to premium rate services.

I know it is sometimes difficult to resist the lure of an interesting caption, but you must learn that things like these are rarely (if ever) benign.