Trend Micro is crying foul over the latest Microsoft move that sees its U.S. customers being offered to install the company’s free Security Essentials solution through the Windows’ Update service – if no antivirus solution is detected on the system. 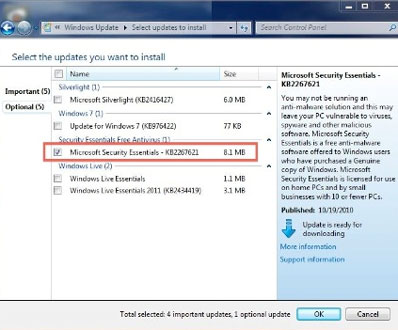 The computer security company is of the opinion that such a move offers Microsoft an unfair advantage over its competition, and argues that the Windows Update service should be used for notifying users about updates to the operating systems and not to push software applications.

Microsoft countered by explaining that it isn’t offering Security Essentials through Windows Update, but via the Microsoft Update service – which, by the way, offers updates for applications such as MS Office and Windows Media Player. But, the distinction between the two services is probably one that many users are not aware of since in Windows Vista and 7 both services look for updates and patches.

“Windows Update is a de facto extension of Windows, so to begin delivering software tied to updates has us concerned,” said Carol Carpenter, executive general manager for the Consumer and Small Business units at Trend Micro. “Windows Update is not a choice for users, and we believe it should not be used this way.”

“We are always looking for the most effective and efficient ways to ensure our customers are protected against viruses, spyware and other malicious threats,” replied Jeff Smith, director of marketing for Security Essentials, and added that the download is optional and that Microsoft is not forcing anyone to download the solution.

And while I understand Trend Micro’s concerns, I believe that their position will not garner them sympathy from computer users. After all, Security Essentials is free – and even if it’s not the very best anti-virus solution there is, it’s always better than nothing. For those people who forgot to install one or didn’t even think about it, the offer can only be seen as a positive one.