Researchers from Imperva’s Hacker Intelligence Initiative (HII) have found dozens of .mil, .gov and .edu web sites which have been hacked with access up for sale due to SQL injection vulnerabilities.

The list includes websites government sites including Defence and State sites in the USA and Europe. 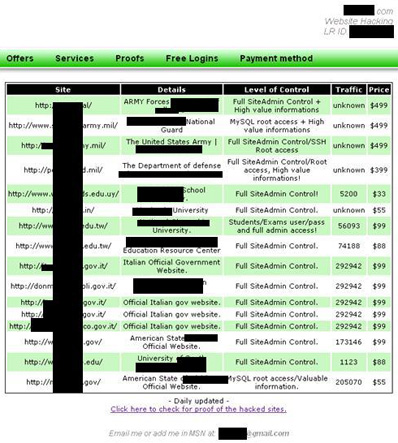 The “traffic’ probably stands for the number of records within the Database tables. The “goods’ in this case are probably the needed information for the “Level of Control.’ For “full site admin’ – probably the credentials and the URL of site administrator interface.

The attacker is also selling personally identifiable information (PII) from hacked sites, for $20 per 1K records:

For example, here they want to sell a list of UConn staff:

The victims’ vulnerabilities were probably obtained by SQL injection vulnerability automatic scanner and exploited in automatic manner, as the attacker published his methods in a post in some hacker forum – see screen shot and explanation:

In the screen shot above we can see IRC “chat” between the SQLi “master” = @evil which issues the scanning commands and the exploiting “x0wner” which performs the commands. In this specific case @evil issues command for to x0wner to obtain DB tables names (“!tbls”) from vulnerable link (“www.site.gr/athlete.php?id=…”) x0wner reports its findings – the tables “activities”, “admin”,…