Despite lingering concerns about the U.S. economic recovery, Americans worry more about having their online privacy violated (25%) than declaring bankruptcy (23%) or losing their job (22%). Research by Opera Software in the United States, Japan and Russia examines what people worry about online. 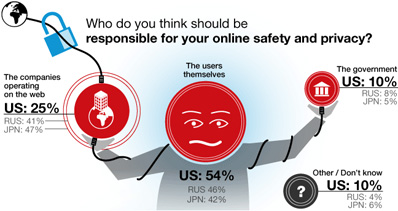 Internet fraud as a result of online privacy violations was among the top four concerns in all three countries, recorded between 22 and 29 percent of respondents. Distress over being hurt in a traffic accident topped the lists in Japan (35%) and United States (27%), while relationship problems kept 40% of Russian respondents awake at night. Relationship drama and pandemics like swine flu tied for second place in Japan’s worries (34%).

The survey aimed to uncover what concerns people have for their online safety and privacy. A thousand or more people in each of the United States, Japan and Russia completed the survey between January 19 and January 24. The figures have been weighted and are representative of all adults aged 18 or more in the three countries.

A large majority (79%) of Americans use anti-virus solutions to protect their privacy. Despite concerns over privacy violations, less than two-thirds of respondents in the United States report that they use safe passwords (61%). Regularly deleting browsing history fared even worse (47%), though men (52%) delete browsing history more often than women (42%). Just 15% of respondents only use software and websites that do not collect personal information. 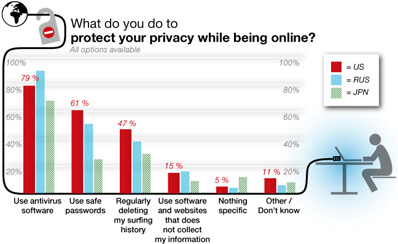 “It is interesting to note the gap between what people say concerns them online and what they do in practice to protect themselves,” said Christen Krogh, Chief Development Officer, Opera Software. “We often see that it is human nature to fear traffic accidents but not wear a seatbelt or helmet, or dread bankruptcy but continue spending, and it very much seems like it is the same for online behavior.”

When asked which device they feel is safer for accessing the Internet, 54% of U.S. respondents believed the desktop computer was safer, while 3% said a mobile phone was safer. 31% did not believe one was safer than the other.

So who should be mostly responsible for ensuring people’s online safety and privacy? 54% in the United States and 46% in Russia believe the onus lies with users themselves, while this response took second place in Japan (42%). Japan instead pinned responsibility on web companies (47%), which took the no. 2 spots in Russia (41%) and the United States (25%).

In sunnier news, all countries agreed that the most effective way to make the world a fairer place would be to give everyone equal rights and opportunities (between 51 and 65%). Vying for second and third place were ending all wars and ensuring everyone has the same access to information and participation in society. U.S. respondents were the most pessimistic; 21% felt nothing could be done to make the world a fairer place, double the 11% in Japan and 9% in Russia.

“It is insightful to speak to people about what worries them online. There are important lessons for all of us about expectations people have for their web experience, and what we can do to improve their feelings of safety and security,” said Christen Krogh. “Opera believes strongly in the Web as a universal right, and it is heartwarming to see that people so highly value access to information as a means to make the world a better place.”