In 2010 the number of identity fraud victims decreased by 28 percent to 8.1 million adults in the United States, three million fewer victims than the prior year, according to Javelin Strategy & Research.

Total annual fraud decreased from $56 billion to $37 billion, the smallest amount in the eight years of the study. While overall fraud declined, consumer out-of-pocket costs rose significantly, mainly due to the types of fraud that were successfully perpetrated and an increase in “friendly fraud.” 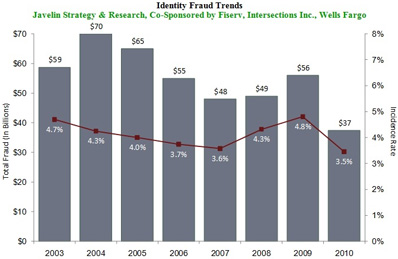 Overall identity fraud incidents decreased in the United States in 2010 – The number of identity fraud incidents decreased by 28 percent over the past year, which brought them down to levels not seen since 2007. The mean fraud amount per victim declined from $4,991 in 2009 to $4,607. One likely contributing factor was the significant drop in reported data breaches according to industry reports: 404 in 2010 with 26 million records exposed, compared to 604 in 2009 with 221 million records exposed.

Consumer fraud costs increased in 2010 – While fraud incidents decreased, the mean consumer out-of-pocket cost due to identity fraud increased 63 percent from $387 in 2009 to $631 per incident in 2010. This may be attributable to changes in the types of fraud perpetrated in 2010, including new account and debit card fraud, highlighting the need for continued consumer vigilance. Consumer fraud costs include costs incurred by the victim towards payoff of any fraudulent debt as well as fees (legal or otherwise) to resolve fraudulent claims.

“Friendly fraud” is on the rise—Friendly fraud – fraud perpetrated by people known to the victim, such as a relative or roommate – grew seven percent last year, with consumers between the ages of 25-34 most likely to be victims of this type of fraud. People in this age group are most likely to have their Social Security number (SSN) stolen—with 41 percent of fraud victims in this group reporting theft of their SSN.

Approximately three million fewer adults were victimized by identity fraud in 2010, compared to 2009 – This is the largest single-year decrease since Javelin started tracking data in 2003 and exceeds the combined decline from 2003-2007, when identity fraud started to increase again. The largest drop previously was 800,000 consumers between 2003 and 2004.

Some factors leading to this decline include the more stringent criteria financial institutions are applying to authenticate users and determine credit risk; as well as more Americans monitoring accounts online and using monitoring protection services that can provide updates to mobile devices. Additionally, according to industry data, reported data breaches dropped significantly, with just seven percent of the U.S. population receiving notifications that their information was exposed in a data breach.

New account fraud is the most damaging to consumers, and the study found that fraudsters are changing their patterns to make it harder to detect. There was a shift to fraudulent opening of non-bank and non-card accounts, such as health club memberships, home phone and cable subscriptions. This type of fraud will not necessarily be caught by checking credit reports. To detect them, consumers should carefully examine financial statements, and consider using a service that monitors public records.