Charlie Sheen’s downward spiral is unfolding right under the public’s eye and has spurred many scammers to take advantage of the users’ interest in the matter and try to further their goals.

Among the various scams, the most macabre is one spotted on Facebook in the last few days which aims to convince the potential victims that Mr. Sheen has been found dead from cardiac arrest at his house.

Variants of the message offer “exclusive videos” and “breaking news” but, according to FaceCrooks, the offered link takes the user to the following page: 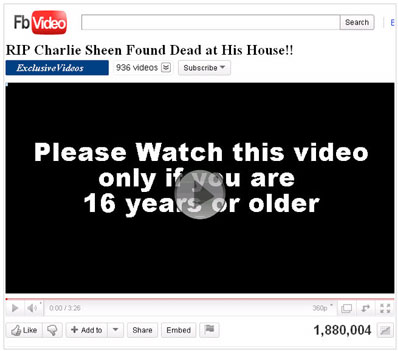 The page mimics a YouTube channel, and a click on anywhere on the screen triggers a “click-jacking” attack that results in the user’s Facebook profile posting the bait message.

Also, a click on the video play button will make a window offering the user to customize his Facebook account in exchange for the completion of a survey pop up.

If you are among those who fell for this scam, check your news feed and delete the spam messages you find within. Also, if you shared your mobile number while answering the offered survey, contact your carrier so that you don’t get saddled with bogus charges.