As the Japanese tragedy unfolds, so do the various online scams taking advantage of people’s interest in the situation. We have already witnessed black hat SEO poisoning that lures users to pages offering fake AV solutions and without a doubt we will be hit by phishing scams posing as calls for donations such as the one that followed the New Zealand earthquake.

In the meantime, Facebook scammers have started a clickjacking/survey scam that lures users in with supposed raw footage of the tsunami that hit Japan after the earthquake. The message contains a link to the page hosting the video purportedly shot by a CNN crew: 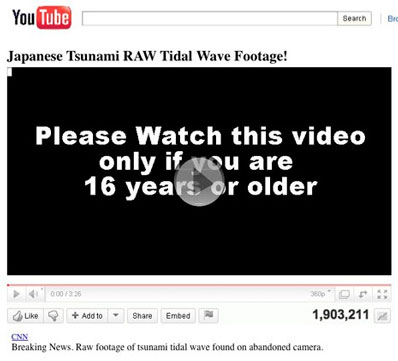 According to Sophos, the mouse-click on the video is hijacked, the victim unknowingly “Likes” the content and thus perpetuates the spreading of the scam. Then, they are asked to complete a survey in order to see the video, which generates revenue for the scammers.

As this unfortunate situation in Japan is likely to continue and have serious repercussions for quite some time, I’m sure this is not the last scam with this theme that we will witness.

If you have fallen for this (or a similar) scam, you should clean up your news feed in order to save your friends from becoming victims. Also, if you have given up you mobile phone number when completing the survey, it is a good idea to contact your carrier and warn them about the possibility of bogus charges appearing on your bill.