An interesting request for help has been made public yesterday by the FBI: “Cryptanalists, help solve an open murder case”.

The murder happened back in 1999. 41-year-old Ricky McCormick’s dead body was discovered in a field, and in his pants’ pocket were found two encrypted notes, which the FBI believes could shed a light on why and by whom he was murdered. 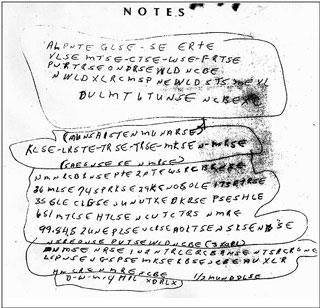 “McCormick was a high school dropout, but he was able to read and write and was said to be ‘street smart’,” says the FBI. “According to members of his family, McCormick had used such encrypted notes since he was a boy, but apparently no one in his family knows how to decipher the codes, and it’s unknown whether anyone besides McCormick could translate his secret language. Investigators believe the notes in McCormick’s pockets were written up to three days before his death.”

The agency admits to have been stumped by the code used. “Despite extensive work by our Cryptanalysis and Racketeering Records Unit (CRRU), as well as help from the American Cryptogram Association, the meanings of those two coded notes remain a mystery to this day, and Ricky McCormick’s murderer has yet to face justice,” they say.

“Standard routes of cryptanalysis seem to have hit brick walls,” noted CRRU chief Dan Olson. A variety of analytical techniques has been used, but they have not yielded results.

At this point, the analysts need either another sample of the code used by McCormick – presumably, they found none with his family or in his house – or a sample of a similar code in order to gain some context that would allow them to decipher the notes. The FBI is hoping that a member of the public might be able to look at the code with fresh eyes and discover the answer, and asks anyone who might know how to break the code or has any information about the case to contact them.

They also point out that there is no reward offered for solving the code, except for “the satisfaction of knowing that your brain power might help bring a killer to justice.”

Even if it turns out that the notes contain no information regarding the murder, they are still interested to see how the code is solved. “This is a cipher system we know nothing about,” admits Olsen.