Facebook and its users have been plagued for a while now by a seemingly never ending steady stream of scams, among which are those that hijack users’ “likes” in order to spread the word about the scheme far and wide.

But – as Sophos’ Chester Wisniewski noticed – life for those scammers has possibly become a little more difficult, since Facebook has rolled out a new security feature who’s goal is to warn users when they are in danger of a “likejacking” attack.

According to him, Sophos has been exhorting Facebook to make a pop-up warning appear every time a user clicks on a suspicious “Like” button – whether it is on purpose or inadvertently during a likejacking attack – to make sure they are aware of what’s happening.

Facebook has finally moved and put into effect a new system that is supposed to detect anomalous “Like” patterns and, once it does, asks the user to “Confirm” that he has presses the “Like” button. Pressing the “Confirm” button makes another message pop-up in a separate window, explaining to the user again that he is trying to “Like” the page. 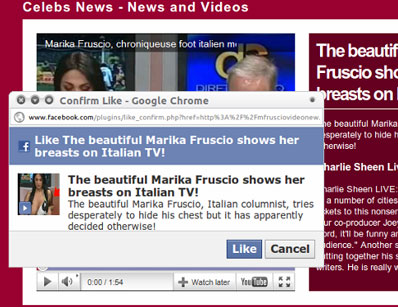 “By making it a popup, they escape the control of the attacker and the page can no longer be modified by the malicious website,” explains Wisniewski.

As good as this news is, the feature shows room for improvement. The algorithm that detects the attacks should be tweaked over time, since it still fails to be triggered by some.

Wisniewski believes that the verification pop-up should be triggered by any and every press of the “Like” button, and that the pop-up for suspicious sites should include a specific warning that they might be falling for a scam.