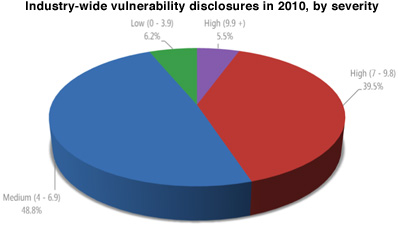 Industry vulnerability disclosure trends continue an overall trend of moderate declines since 2006. This trend is likely because of better development practices and quality control throughout the industry, which result in more secure software and fewer vulnerabilities. 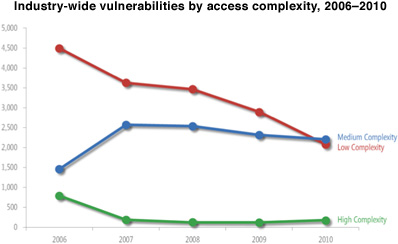 The exploitation of Java vulnerabilities sharply increased in the second quarter of 2010 and surpassed every other exploitation category that the MMPC tracks, including generic HTML/scripting exploits, operating system exploits, and document exploits.

Exploits that use HTML and JavaScript steadily increased throughout the year and continue to represent a large portion of exploits. The most prevalent type of attack in this category involved malicious IFrames. The number of Adobe Acrobat and Adobe Reader exploits dropped by more than half after the first quarter, and remained near this reduced level throughout the remainder of the year. 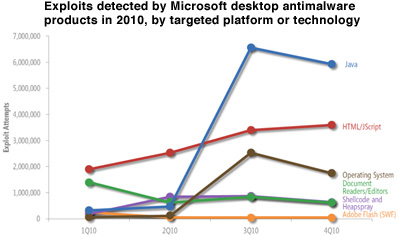 In the first half of 2010, phishers showed signs of targeting online gaming sites with increasing frequency, although this push appeared to have dwindled as social networks came under increased attack. Impressions that targeted gaming sites reached a high of 16.7 percent of all impressions in June before dropping to a more typical 2.1 percent in December.

Phishing sites that target social networks routinely receive the highest number of impressions per active phishing site. The percentage of active phishing sites that targeted social networks increased during the final months of the year, but still only accounted for 4.2 percent of active sites in December, despite receiving 84.5 percent of impressions that month. Nevertheless, the number of active sites targeting gaming sites remained relatively high during the second half of the year, which suggests that more campaigns may be coming.