Hacking Twitter feeds of popular mainstream media outlets is a perfect way of getting your message across to or create panic among a great number of people. It has also lately been used by hacker groups to simply raise their profile and make the public aware of their existence.

The latest media house targeted this way has been Sky News, when a tweet saying “BREAKING: James Murdoch arrested over phone-hacking claims. Questioned at Paddington Green police station at 10pm” appeared on its Twitter feed on Sunday.

Soon re-twitted by many followers, the fake news created quite a stir. But, Sky News took the message down pretty fast and notified its followers that it’s investigating the matter, saying that the Tweet feed was possibly hacked: 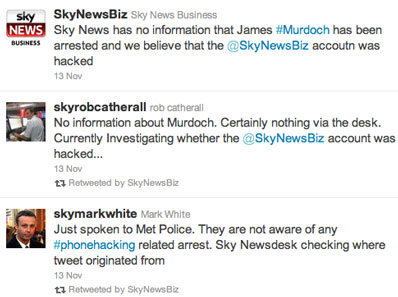 Attacks such as these are very successful at creating a splash, since Twitter users are very likely to believe anything that pops up on a feed belonging to established news outlets.

Sky News is likely to find out soon whether the hack was executed by an insider – possibly as a joke – or by hackers.

My bet is on the “TheScriptKiddies”, as all their latest Twitter hacks were carried out on a Sunday. But, they usually leave a message taking responsibility for the hack. Perhaps this time they were locked out of the account before having the chance to do it?