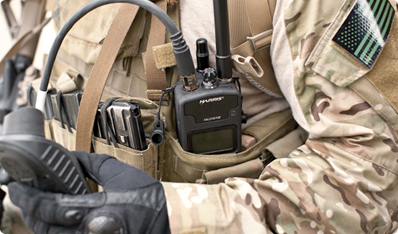 SUAS-DDL, a Department of Defense standard waveform, provides enhanced interoperability between small UAS in the air and video receivers and control stations on the ground. The characteristics of the waveform allow multiple UAS to transmit video on the same frequency.

“The addition of SUAS-DDL adds greater capability to our SAVR video receiver,” said Dana Mehnert, group president, Harris RF Communications. “Users will be able to switch easily between multiple video and data feeds, providing them with critical real-time information. Lightweight and portable, the SAVR provides these feeds directly to the individual warfighter.”

The multiband RF-7800T SAVR delivers real-time video feeds from cameras on aircraft or UAS platforms to ground forces. Designed for the dismounted warfighter as well as for fixed and vehicular applications, the small, lightweight RF-7800T enables feeds to be viewed outside the TOC and while personnel are on the move.

As a member of the combat-proven Falcon III family of radios, the RF-7800T leverages the Falcon III SCA architecture, allowing the product to remain on the cusp of emerging data link standards through software upgrades. Video feeds from the RF-7800T are easily disseminated over Falcon III radio networks.