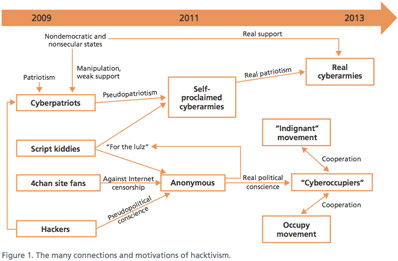 “Many of the threats that will become prominent in 2012 have already been looming under the radar in 2011,” said Vincent Weafer, senior vice president of McAfee Labs. “Over the past year, the general public has become more aware of some of these risks, such as threats to critical infrastructure or the impact of hacktivism as they gain international media attention. In the meantime, we continue to see cybercriminals improving their toolkits and malware and are ready to make a significant impact in 2012.”

Water, electricity, oil and gas are essential to people’s everyday lives, yet many industrial systems are not prepared for cyberattacks. Many of the environments where SCADA (supervisory control and data acquisition) systems are deployed don’t have stringent security practices. As with recent incidents directed at water utilities in the United States, attackers will continue to leverage this lack of preparedness, if only for blackmail or extortion in 2012.

McAfee Labs has seen a drop in global spam volumes in the past two years. However, legitimate advertisers are picking up where the spammers left off, using the same spamming techniques, such as purchasing email lists of users who have “consented” to receive advertising or purchasing customer databases from companies going out of business. McAfee Labs expects to see this “legal” spam and the technique known as “snowshoe spamming” to continue to grow at a faster rate than illegal phishing and confidence scams.

2011 has seen the largest levels in mobile malware history. In 2012, McAfee Labs expects for mobile attackers to improve on their skill set and move toward mobile banking attacks. Techniques previously dedicated for online banking, such as stealing from victims while they are still logged on while making it appear that transactions are coming from the legitimate user, will now target mobile banking users. McAfee Labs expects attackers will bypass PCs and go straight after mobile banking apps, as more and more users handle their finances on mobile devices.

Embedded systems are designed for a specific control function within a larger system and are commonly used in automotive, medical devices, GPS devices, routers, digital cameras and printers. McAfee Labs expects to see proofs-of-concept codes exploiting embedded systems to become more effective in 2012 and beyond. This will require malware that attacks at the hardware layer, and will enable attacks to gain greater control and maintain long-term access to the system and its data. Sophisticated hackers will then have complete control over hardware.

Hacktivism: Joining forces online and on the front lines

McAfee Labs predicts that in 2012, either the “true” Anonymous group will reinvent itself, or die out. Additionally, those leading the digital disruptions will join forces with physical demonstrators, and will target public figures such as politicians, industry leaders, judges and law enforcement, more than ever before.

Virtual currency, sometimes called cybercurrency, has become a popular way for people to exchange money online. These online “wallets” are not encrypted and the transactions are public, making them an attractive target for cybercriminals. McAfee Labs expects to see this threat evolve into spam, data theft, tools, support networks and other associated services dedicated to solely exploiting virtual currencies, in order to steal money from unsuspecting victims or to spread malware.

Countries are vulnerable due to massive dependence on computer systems and a cyberdefense that primarily defends only government and military networks. Many countries realize the crippling potential of cyberattacks against critical infrastructure, such as water, gas and power, and how difficult it is to defend against them. McAfee Labs expects to see countries demonstrate their cyberwar capabilities in 2012, in order to send a message.

Organizations and individuals tend to trust digitally signed certificates; however, recent threats such as Stuxnet and Duqu used rogue certificates to evade detection. McAfee Labs expects to see the production and circulation of fake rogue certificates increase in 2012. Wide-scale targeting of certificate authorities and the broader use of fraudulent digital certificates will affect key infrastructure and secure browsing and transactions, as well as host-based technologies such as whitelisting and application control.

DNSSEC (Domain Name System Security Extensions) are meant to protect a client computer from inadvertently communicating with a host as a result of a “man-in-the-middle” attack. Such an attack redirects the traffic from the intended server (Web page, email, etc.) to another server. Governing bodies around the globe are taking greater interest in establishing “rules of the road” for Internet traffic, and McAfee Labs expects to see more and more instances in which future solutions are hampered by legislative issues.

Advances in operating systems moves hackers “down and out”

New security features baked into the core of the operating system will cause hackers to find alternate entryways: down into the hardware and out of the operating system. Attacking hardware and firmware is not easy, but success allows attackers to create persistent malware in network cards, hard drives and even system BIOS (Basic Input Output System). McAfee Labs expects to see more effort put into hardware and firmware exploits and their related real-world attacks through 2012.