As the Internet-wide blackout in protest of the anti-piracy PIPA and SOPA legislations was slowly winding down, US authorities have announced the seizure and takedown of Megaupload, one of the most popular online file-sharing services.

The site was shuttered on Thursday, and its main page changed to show a message from the US Justice Department: 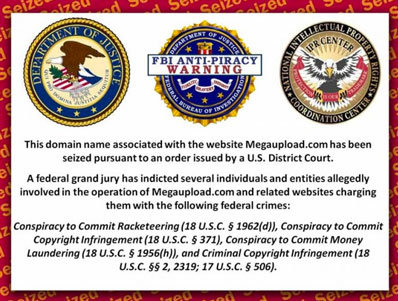 As it says, seven individuals were charged with racketeering, criminal copyright infringement and money laundering charges, but only four have been arrested so far. Among them are Megaupload’s founders Kim Dotcom (formerly Kim Schmitz) and Mathias Ortmann, who were arrested in New Zealand at the request of US law enforcement officials.

According to the unsealed indictment, 18 other domains connected with Megaupload were seized, and DOJ revealed that the action which resulted in the arrests of the aforementioned individuals was coordinated with the execution of some 20 more warrants in the US and other 8 countries. All in all, law enforcement agencies have seized around $50 million in various assets.

The arrested individuals are set to fight the charges and claim that the the vast majority of Megaupload’s internet traffic is legitimate, and that they can’t be held responsible for pirated files uploaded by its users. The DOJ countered by saying that

In the meantime, as the news of the arrests began spreading, the hacker collective Anonymous launched Operation Megaupload – a coordinated, large-scale DDoS attack on the official websites of the US DOJ, the FBI, the RIAA, the MPAA, Universal Music, and other law-enforcement and entertainment sites, which were knocked offline for a while – and some still are.

To do that, they called upon the public to help, both by deploying their LOICs ‘Low Orbit Ion Cannon DoS software) and by visiting a page on pastehtml.com.

“If you visit the webpage, and do not have JavaScript disabled, you will instantly, without user interaction, begin to flood a website of Anonymous’s choice with unwanted traffic, helping to perpetuate a DDoS attack,” explains Sophos.