Hoaxes claiming that Facebook will shut down or stop being a free service are regularly propagated through the social network, raising panic with users who haven’t witnessed one before.

Fake news that “Facebook will end on March 15th, 2010!” is currently popping up on users’ walls, and fooling a number of users because it has been published by a legitimate news site – Weekly World News (WWN): 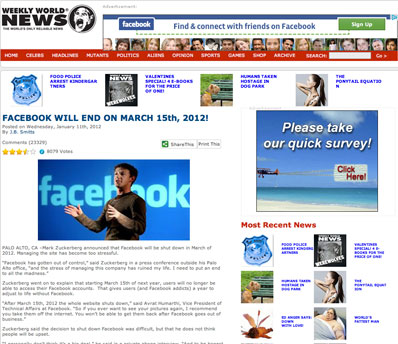 But not many users are aware that the Weekly World News website is the successor of the eponymous US supermarket tabloid that is known for publishing outlandish stories that are rarely based on true information.

“Facebook has gotten out of control,” supposedly said Zuckerberg, “and the stress of managing this company has ruined my life. I need to put an end to all the madness.”

“Hoaxes like this waste time, use up bandwidth, and simply underline that many people don’t check their facts before sharing links and spreading news,” commented Sophos’ Graham Cluley.”The only thing they do serve to do is bring a lot of traffic to the Weekly World News website, which presumably makes their advertising team happy.”