iOS device owners whose Apple ID account may have triggered a flag with Apple’s security team have been asked to set up three new security questions and a backup email address when they tried to download apps from the App Store. 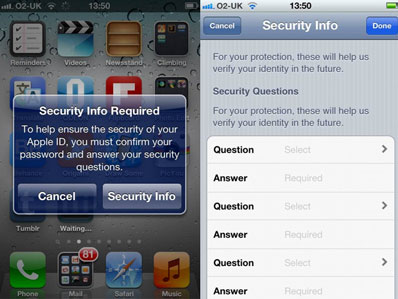 The request has left some of them wondering whether they were subjected to a phishing attempt, as Apple hasn’t announced or explained the move beforehand.

“Just had the same pop up. If this is legit then someone really needs a slap. It looked like a phishing attempt and I instinctively hit cancel when I saw it,” commented one of the users.

But the request is legitimate – as Apple has confirmed for ars technica – and is part of the company’s attempt to shore up security.

“While it’s a welcome move toward stronger security for the increasingly targeted venues, users have been caught off-guard, unsure if the messages themselves are the work of phishers or scammers,” commented Sophos’ lisa Vaas. “After all, the messages bear the scam stamp: they’re unsolicited, they were unannounced by the characteristically tight-lipped Apple, and they solicit information.”

Nevertheless, it is definitely a good move by Apple, as the Apple ID account is tied to Apple’s Retail website and its media services, not to mention that many users cave credit cards associated with it.