Despite the apparent enthusiasm around cloud computing, a Wisegate survey revealed that over 50% believe the cloud is too risky for prime time, and only suitable for commodity applications like CRM or e-mail. 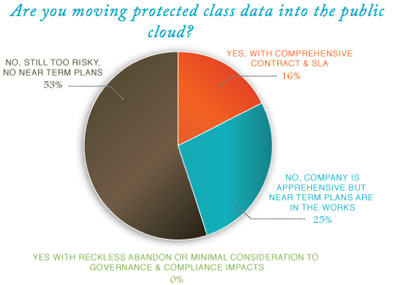 When asked if they were moving protected class data into the public cloud, 53% of senior IT practitioners from leading companies in financial services, healthcare, consumer products, automotive, and government agencies said that the “cloud was too risky and they have no near term plans” to adopt cloud for such applications.

Many reported that government or industry regulations (such as HIPAA or Sarbanes-Oxley) prevent them from adopting cloud-based applications.

Only 16% responded that they were moving ahead with plans but emphasized they would need a comprehensive contract and an SLA agreement in place. The other 25% said their company was apprehensive about cloud computing but have some near term plans in place.

The overall sentiment from additional survey questions overwhelmingly revealed that security remains the top concern for cloud adoption. However, for those organizations that are putting applications like email, in the cloud, there are a couple of keys for doing so including:

1. Ensuring that SLA agreements cover connectivity, response time, uptime and issue resolution.
2. Knowing what the maximum “send” and “receive” limits are for each mailbox and for the entire organization.
3. Understanding the disaster recovery (DR) and digital archiving processes offered by the chosen service provider.