The U.K. Metropolitan Police’s Central e-Crime Unit has arrested three individuals that have allegedly participated in a scheme to defraud Internet users by making them believe they have been caught doing something illegal.

To do that, the scammers used currently hugely popular ransomware that blocked the victims’ computers and ask them to pay a fine via Ukash or Paysafecard in order to get their computers unlocked: 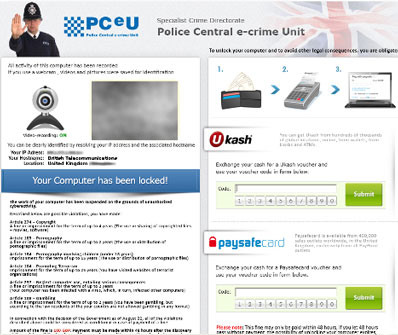 On Tuesday, PCeU officers based at the Metropolitan Police Service and North West hubs, along with colleagues from Staffordshire Police, swooped down on two men and a women based in Stoke on Trent.

All three are currently being held in custody.

“The arrests shows we are determined to combat this type of crime. I remind all computer users that police do not use such a method to impose or enforce fines, so if you are confronted by such a page do not enter any of your details,” noted PCeU Detective Inspector Jason Tunn, and advised anyone faced with the above notice to contact the police.