Two distinct spam campaigns taking advantage of the current political situation in Syria have been spotted by Symantec and Kaspersky Lab researchers.

The first one consists of an email simply stating “Dear sir, please find the attachment”, urging the user to open the chemical attack in Syria.doc file in the attachment.

The file contains a recent Washington Post article, but is also specially crafted to exploit a Microsoft Internet Explorer vulnerability (CVE-2013-2551) and, if successful, surreptitiously installs the Korplug Trojan onto the targeted machine, which then opens a backdoor into it and will likely lead to confidential information being exfiltrated by the attackers.

The second malicious email is even more dangerous, as it’s made to look like it has been sent by the CNN and contains the claim that the US has already started bombing Syria (click on the screenshot to enlarge it): 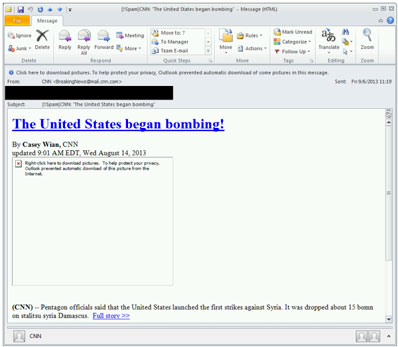 The goal of the attack is to saddle the user with a Trojan downloader, which will subsequently download even more malware on the computer.

Attacks such as these are nothing new, as malware peddlers often use news of current events as a way to lure in the most curious of users. Syria-themed spam will likely be landing in users’ inboxes for a while yet.