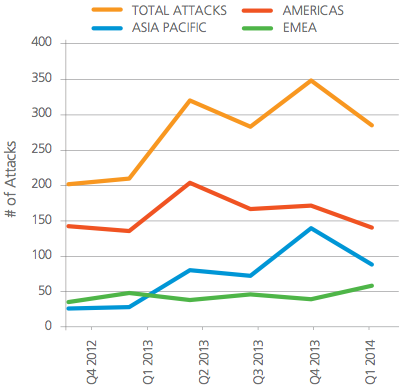 Year-over-year, global average connection speeds grew by 24% and increases were seen in all but seven countries/regions. Growth ranged from a low of 0.7% in Panama (2.6 Mbps) to a high of 196% in Sudan (3.2 Mbps). South Korea showed a 145% increase from the first quarter of 2013, a growth rate that nearly tripled Ireland’s 47% increase, which ranked second in year-over-year growth among the top 10.

The year-over-year story remains positive. Since the first quarter of 2013, global average peak connection speeds increased 13%. Yearly growth rates among the top 10 countries/regions ranged from 0.3% in Hong Kong (66 Mbps) to an impressive 206% in Uruguay (45.4 Mbps).

Global high broadband (>10 Mbps) adoption rates in the first quarter improved by 9.4% quarter-over-quarter, climbing above the 20% mark for the first time, to 21%. Once again, all of the countries/regions in the top 10 had high broadband adoption rates of 30%, with South Korea (77%), Japan (54%) and Switzerland (45%) topping the list. The year-over-year growth rate was 65%, with six of the top 10 countries/regions seeing increases of 50% or more.

“While there continues to be room for improvement in high broadband adoption and average peak connection speeds in some areas of the world, the trends we’re seeing remain very positive,” said David Belson, the author of the report. “Steady year-over-year growth suggests that a strong, global foundation is being built for the enjoyment of next generation content and services like 4K video and increasingly connected homes and offices, and that connectivity will continue to evolve to support the growing demands these emerging technologies will place on the Internet.”

With 4K (Ultra HD) adaptive bitrate streams generally requiring between 10 – 20 Mbps of bandwidth, the new “4K Readiness” metric presented for the first time in the First Quarter, 2014 State of the Internet Report highlights the percentage of connections to Akamai at speeds above 15 Mbps, with the goal of identifying candidate geographies most likely to be able to sustain such streams. The findings do not account for other “readiness” factors, including availability of 4K-encoded content or 4K-capable televisions and players.

Globally, 11% of connections were at speeds of 15 Mbps or above in the first quarter. Seven of the top 10 countries/regions on the 4K readiness list overlapped with those on the global high broadband connectivity list. South Korea led the list with 60% 4K readiness while Japan had 32% of its connections at that level in the first quarter. Of the top 10, the Czech Republic had the lowest level of 4K readiness with 17%. Overall, 47 countries/regions qualified for inclusion.

Akamai maintains a distributed set of unadvertised agents deployed across the Internet to log connection attempts that the company classifies as attack traffic. Based on the data collected by these agents, Akamai is able to identify the top countries from which attack traffic originates, as well as the top ports targeted by these attacks. It is important to note, however, that the originating country as identified by the source IP address may not represent the nation in which an attacker resides.

In addition to observations on attack traffic, the State of the Internet Report includes insight into DDoS attacks based on reports from Akamai’s customers. The number of DDoS attacks reported in the first quarter of 2014 declined to 283 from 346 in the last quarter of 2013. This represents a 20% decrease quarter-over-quarter and a 27% increase year-over-year.

Most regions of the world saw a decline in reported DDoS attacks during the first quarter of 2014. The Americas continued to account for approximately 49% (139) of all attacks, followed by the Asia Pacific region with 31% (87) of attacks and EMEA receiving the remaining 20% (57) of DDoS traffic. The enterprise sector saw a 49% quarter-over-quarter reduction in attack traffic, while public sector attack traffic grew by 34%, primarily attributable to attacks against government targets within Singapore.

In the first quarter of 2014, more than 795 million unique IPv4 addresses from 240 countries/regions connected to the Akamai Intelligent Platform. This was 1.6% more than in the fourth quarter of 2013 and 7.8% more than a year prior. Quarterly growth was seen in six of the top 10 countries/regions. Brazil was again a standout with 12% and 50% of quarterly and yearly growth, respectively.

European countries continued to lead in IPv6 adoption, taking eight of the top 10 slots. Belgium grew nearly 200% quarter-over-quarter, jumping to first place with 14% of its traffic over IPv6. The United States and Peru were the only two countries from the Americas within the top 10, while Japan fell out of the top 10, leaving the Asia Pacific region unrepresented within the group.

The report also lists the top 20 network providers based on their number of IPv6 requests made to Akamai during the first quarter. The highest request volumes came from cable and wireless providers in the United States. Verizon Wireless had the highest percentage (45%) of requests over IPv6, while 12 other providers also had more than 10% of their requests to Akamai over IPv6 during the first quarter. European providers were also heavily represented, including three providers from Belgium with strong showings. KDDI (Japan) and Telekom Malaysia were the only two providers to represent the Asia Pacific region, while Telefonica del Peru was the only South American provider on the list.

The State of the Internet Report now includes a broadband adoption statistic within the Mobile Connectivity section. This quarter, Ukraine had the highest level of mobile broadband adoption, with 89% of mobile connections to Akamai from the country at speeds above 4 Mbps.