There is finally a free alternative for all iOS users who are looking to encrypt their voice calls: the app is called Signal, and has been developed by the Open Whisper Systems project. 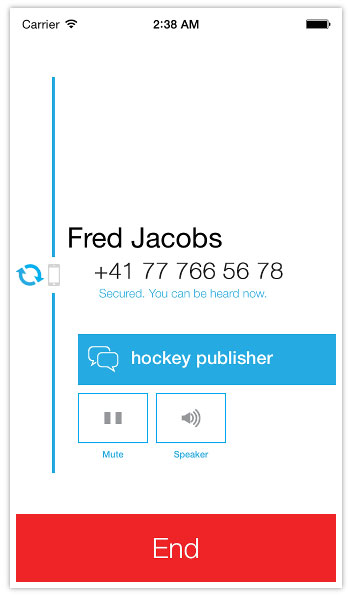 Open Whisper Systems – then just Whisper Systems – was started by security researcher Moxie Marlinspike and roboticist Stuart Anderson in 2010. After having been acquired by Twitter, some of its popular software such as RedPhone and TextSecure for Android has been made available under free and open-source licenses.

Signal is also open source, and its developers have invited anyone with the required knowledge to audit the security of the code, and to contribute improvements.

As its Android counterpart RedPhone before it, the app uses the ZRTP protocol for secure voice communication. The ZRTP, developed by PGP creator Philip Zimmermann, is widely believed to be resistant to all known attacks aimed at breaking it.

“Signal uses your existing number, doesn’t require a password, and leverages privacy-preserving contact discovery to immediately display which of your contacts are reachable with Signal,” the developers explained in the announcement.

Once you download the app and install it, you will receive a validation SMS from one of the servers the project has set up around the world to handle the encrypted calls.

When calling another Signal or RedPhone user, the app will also present a Short Authentication String – two random words – which you and the user you are talking to should read to each other during the call. One user can read the first word, and the other the second one.

“If the SAS matches on both phones (and you recognize your friend’s voice), then you can be reasonably certain that nobody is performing a man-in-the-middle attack and listening to your call,” one of the team explained. “Once you’ve done that, there should be a way to mark the call as verified, so that all future calls with that person won’t have to go through the same process.”

Signal is currently compatible with RedPhone, but the project’s intent is to develop it into a unified private voice and text communication platform for iPhone, Android, and the browser. Encrypted text communication will be added to Signal later this summer.

At the moment, Signal is not iOS 8 compatible, but the team is working on it.