Information security is low down on the list of risks to the business, according to NTT Com Security. The report, based on a survey of 800 senior business decision-makers (not in an IT role) in Australia, France, Germany, Hong Kong, Norway, Sweden, UK and US, is designed to determine the level of risk in large organisations and the value that senior executives place on data and information security. 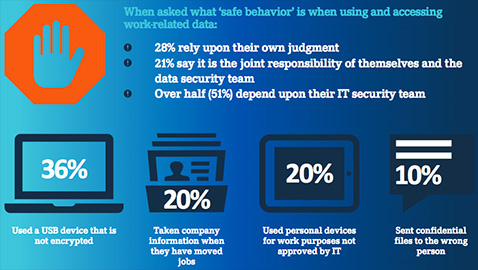 While nearly two-thirds (63%) of respondents expect to suffer a security breach at some point, less than one in ten (9%) see “poor data security’ as the greatest risk to their business. Respondents are most likely to see risks coming from competitors taking market share, lack of employee skills and decreasing profits.

Senior executives also fail to recognise the long-term damage – both in terms of time and money – that a security breach might have on their business. Over half (59%) agree there would be minimal long-term damage, although a significant number report that their organisation would suffer reputational damage (60%) and loss of customer confidence (56%) if data was stolen.

When it comes to the financial impact of a security breach, respondents estimate that their revenue would drop, on average, by 8%. However, 17% expect it to have no impact at all on revenue, while a quarter (25%) admit they do not know what the financial implications would be.

“The concern here is whether senior business decision makers recognise the risks to their organisation, as well as understand the value of good data security. There seems to be a worrying level of indifference,” according to Garry Sidaway, Senior Vice President Security Strategy & Alliances, NTT Com Security. “When we asked respondents what they associate with the term data security, only half believe it is “vital’ to the business, less than half see it as “good practice’ and less than a quarter see it as “a business enabler’. The majority unfortunately still associates security with data protection or privacy. 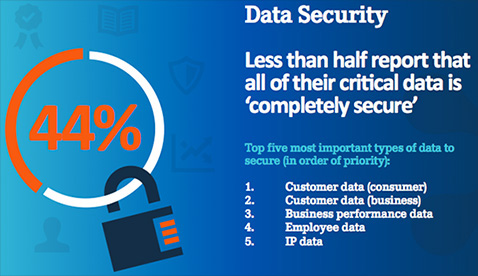 “The report also suggests that there is still a disconnect between the cost of data breaches and the importance organisations place on IT security to drive these costs down. With security incidents making headlines daily, and costs soaring for a major breach – up to $1.8m (1.4m Euros) on average for a large organization – a security incident can have far-reaching implications, from damaging a company’s reputation and share price to its ability to attract the very best talent.”

Data policies in the business

Impact of a data security breach