Data loss and downtime cost enterprises $1.7 trillion in the last twelve months, or the equivalent of nearly 50% of Germany’s GDP. Data loss is up by 400% since 2012 while, surprisingly, 71% of organizations are still not fully confident in their ability to recover after a disruption, according to EMC Corporation. 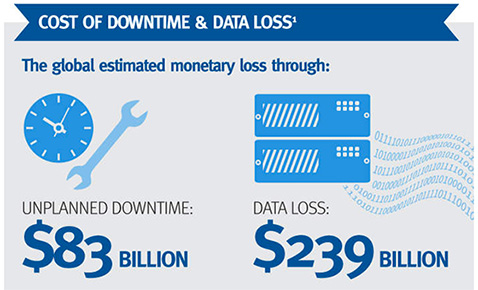 The good news is that the number of data loss incidents is decreasing overall. However, the volume of data lost during an incident is growing exponentially:

Adopting advanced data protection technologies dramatically decreases the likelihood of disruption. And, many companies turn to multiple IT vendors to solve their data protection challenges. However, a siloed approach to deploying these can increase risks:

EMC Data Protection Index survey participants were awarded points based on their responses, ranking their data protection maturity in one of four categories (see methodology for further details):

Guy Churchward, President, EMC Core Technologies said: “This research highlights the enormous monetary impact of unplanned downtime and data loss to businesses everywhere. With 62% of IT decision-makers interviewed feeling challenged to protect hybrid cloud, big data and mobile, it’s understandable that almost all of them lack the confidence that data protection will be able to meet future business challenges. We hope the global data protection index will prompt IT leaders to pause and reevaluate whether their current data protection solutions are in alignment with today’s business requirements as well as their long term goals.”