Consumer online privacy concerns remain extremely high with 92 percent of American internet users worrying to some extent about their privacy online – the same percentage as in January 2014. 44 percent said they were frequently or always concerned and 42 percent agreed they were more concerned than one year ago. 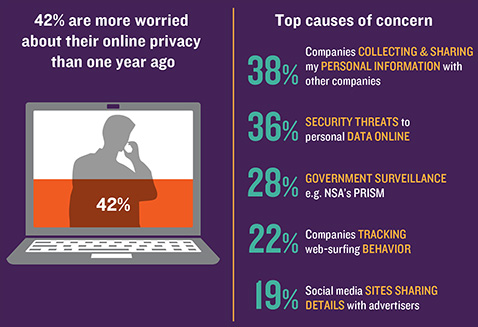 When those who worry about their privacy online were asked what had contributed most to this feeling, 38 percent said companies sharing their personal information with other companies, while 36 percent were concerned about recent security threats such as the Heartbleed bug. 28 percent listed government surveillance programs such as the NSA’s PRISM as a reason for their increased concern – a slight increase over the previous year.

Among those who worry about their privacy, 37 percent said companies being more transparent about how they are collecting and using data and more active in enforcement of measures to protect privacy online were the best ways to lower their concerns. Last week, President Obama announced a package of measures in his State of the Union address to enhance consumers’ security and improve privacy online; 27 percent say that governments passing more legislation to protect their personal information online would help alleviate their concerns. 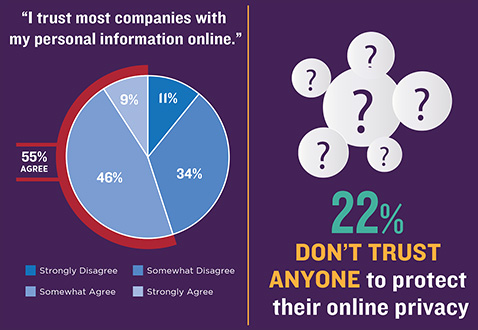 86 percent have taken active steps to protect their privacy in the last 12 months but around half (49 percent) say they still don’t think they dedicate enough time to this. In the last year:

Chris Babel CEO, TRUSTe commented: “Governments tread a fine line between balancing national security and consumer privacy rights; for businesses the stakes are high too. In an increasingly interconnected world, lack of trust can limit growth and strangle innovation as companies are deprived of the data they need to drive sales.

The TRUSTe 2015 US Consumer Confidence Privacy Index, is based on data from two online surveys conducted by Ipsos with around 1,000 US Internet users between November 28 and January 15.