Akamai released a new security report that provides analysis and insight into the global attack threat landscape including DDoS attacks. 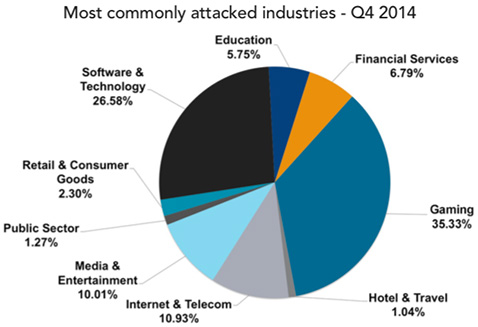 Akamai observed a 52 percent increase in average peak bandwidth of DDoS attacks compared to Q4 a year ago. Large packets of unwanted network traffic can quickly sap an enterprise’s ability to respond to legitimate customers, resulting in denial of service outages. Most unprotected sites cannot withstand a typical DDoS attack. As a result, DDoS attacks have become part of the common cybersecurity threatscape that all enterprises with an online presence must anticipate in a risk assessment.

Resourceful DDoS-for-hire booter suites took a low-investment approach by tapping into reflection-based DDoS attacks. Nearly 40 percent of all DDoS attacks used reflection techniques, which rely on Internet protocols that respond with more traffic than they receive and do not require an attacker to gain control over the server or device.

The timing of DDoS attacks was distributed more evenly in Q4, a DDoS trend that appears to be fueled by an increasing number of targets of greater value in previously underrepresented geographic locations. In addition, geographical sources of malicious traffic have shifted. The United States and China continued as the lead source countries for DDoS traffic, but instead of the Brazil, Russia, India and China (BRIC) block that dominated in Q3 2014, Q4 DDoS attack traffic came in large part from the United States, China and Western Europe.