A group of Yahoo researchers have demonstrated that apart from fingerprints, other parts of the human body, such as ears, fists, palms and fingers, can also be successfully used to authenticate users to their mobile phones. 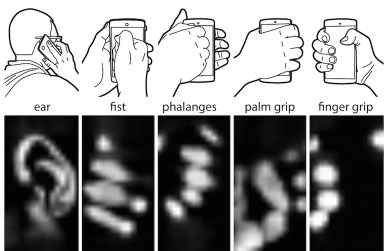 This option is also much cheaper: fingerprint scanners are pricy and drive the cost of phones way up, while the researchers’ Bodyprint solution requires only a touchscreen, which many modern mobile phones have.

“While the input resolution of a touchscreen is ~6 dpi, the surface area is larger, allowing the touch sensor to scan users’ body parts, such as ears, fingers, fists, and palms by pressing them against the display. Bodyprint compensates for the low input resolution with an increased false rejection rate, but does not compromise on authentication precision,” the researchers noted.

“In our evaluation with 12 participants, Bodyprint classified body parts with 99.98% accuracy and identifies users with 99.52% accuracy with a false rejection rate of 26.82% to prevent false positives. Scanning users’ ears for identification, Bodyprint achieves 99.8% authentication precision with a false-rejection rate of 1 out of 13, thereby bringing reliable biometric user authentication to a vast number of commodity devices.”

For more details about the solution, you can check out their paper. They have also demonstrated its efficacy in this video: