CFOs’ long-term outlook for the North American economy remains strong despite their weakening confidence in their own companies’ prospects, according to Deloitte. Lower expectations for growth in revenue, earnings, and domestic hiring appear to be behind this declining sentiment. 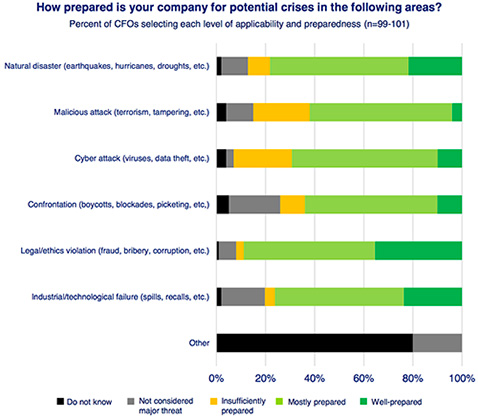 Surveyed CFOs are concerned about a number of internal and external risks. Externally, issues that continue to be challenging for CFOs include global economic concerns like risks associated with trade and FX impacts of central banks’ monetary policies.

CFOs believe rising commodity prices and the burden of government regulation are priority concerns as well. From an internal standpoint, attracting and retaining finance talent remains an ongoing issue. More than 70 percent of CFOs cite initial shortages of consultative, partnering, analytical and technical skills among staff.

Crisis preparedness is another issue weighing on CFOs this quarter, with cyber-security attacks cited as the most threatening potential crisis.

“The effective way for CFOs to ensure their night sleep is not interrupted by cyber threat nightmares, is to know what these are, and their mitigation plans,” according to Vladimir Jirasek, CEO at Jirasek Security Consulting & Director of research, Cloud Security Alliance UK. “Nonetheless, people resourcing has become a problem for businesses. The knowledge of cyber security threats and countermeasures is inadequate due to shortage of experienced professionals.”

Almost one-fourth of CFOs say they are insufficiently prepared for an attack and only 10 percent feel well-prepared. Technology and Financial Services CFOs feel the most unprepared, with 50 percent and 30 percent citing this concern, respectively.

“First the good news. Protecting information assets, and recognizing the risks to these is recognized by the CFO. As data subjects for much of the assets held by the interviewees knowing that the risk is recognized is big step in the right direction, according to Raj Samani, VP and CTO EMEA at Intel Security. “However with only 1 in 10 commenting that they are well prepared for a cyber-attack suggests we still have a long way to go, and that the hourly news cycle of breaches where data about you and I is being sold off for profit by criminals will sadly continue,” Samani added.

Eighty-five percent of CFOs consider malicious attacks such as terrorism or tampering a major concern, while only four percent feel well-prepared.

Brian Honan, CEO at BH Consulting and Special Advisor on Internet Security to Europol’s EC3, believes that the old saying “a stich in time, saves nine” is particularly relevant to preventing and responding to cyber-attacks. “Lack of investing in cybersecurity can result in false economies as often the cost and damage of a breach often outweigh those associated with preventing the breach in the first place. One can only hope that given the recognition of the problem these CFOs will now ensure that budgetary approval will be more readily forthcoming in bridging this gap,” concludes Honan.
More about
Share this