Five apps on Google Play carry Viking Horde, a new malware family that ropes Android devices into an ad-clicking botnet, but can also make them send out spam, send SMS messages to premium-rate numbers, download additional apps, and even participate in DDoS attacks.

The discovery was made by Check Point researchers, and they have notified Google about it on May 5, but as I’m writing this, the apps are still available on Android’s official app store. 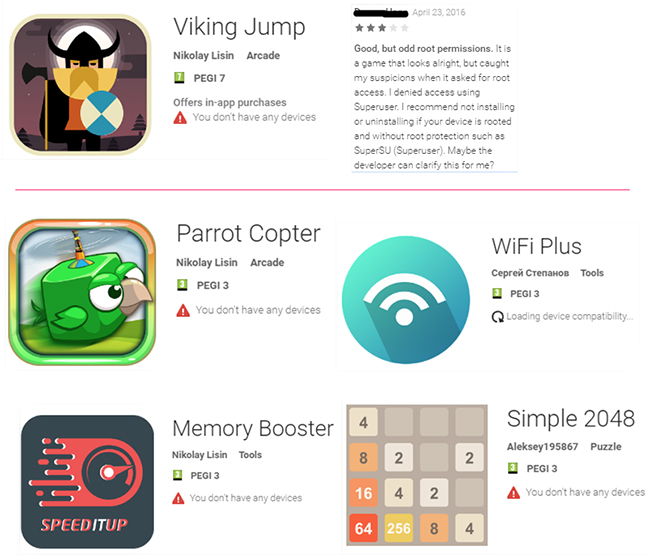 The most popular of these is Viking Jump, which was installed by at least 50,000 users, despite the poor ratings and reviews that point to its questionable nature. The rest have been installed between 50 and 5,000 times.

The researchers dubbed the malware hiding behind the apps Viking Horde.

“On all devices – rooted or not – Viking Horde creates a botnet that uses proxied IP addresses to disguise ad clicks, generating revenue for the attacker,” they shared.

“On rooted devices, [it] delivers additional malware payloads that can execute any code remotely, potentially compromising the security of data on the device.”

The malware installation process is as follows:

A number of C&C servers tell the botnet what to do, and each of those controls a few hundred devices.

According to the researchers, the malware uses several techniques to make sure it persists on the infected device, and is difficult to remove manually.

For one, it installs a number of components with system-related names, so that they are difficult to spot. Secondly, it the device is rooted, a component (app_exec) enables another copy of the malware to be quietly installed if the first one is deleted, and a second one (watchdog) makes sure that the first component is reinstalled if removed.