According to BDO’s analysis of risk factors listed in the most recent 10-K filings of the 100 largest US retailers, risk associated with a possible security breach was cited unanimously by retailers, claiming the top spot, up from the 18th spot in 2007.

Since major retail security breaches began making national headlines in 2013, retailers have become acutely aware of the growing cyber threat and cyber-related risks. Between new point-of-sale systems and evolving digital channels, the industry faces unique vulnerabilities: Retailers are responsible for safeguarding consumer data as well as their own, in addition to protecting against potential gaps in security related to third-party suppliers and vendors.

“2016 marks the 10th anniversary of our retail risk factor analysis, and throughout the decade, we’ve seen the retail landscape undergo a dramatic evolution in response to the recession, new and maturing e-commerce channels and evolving consumer preferences,” said Doug Hart, partner in BDO’s Consumer Business practice. “Retailers over the years have proven to be in tune with the industry-wide issues and trends that could pose risks to their businesses, and they are clearly not tone deaf when it comes to reacting to the urgency of cybersecurity.” 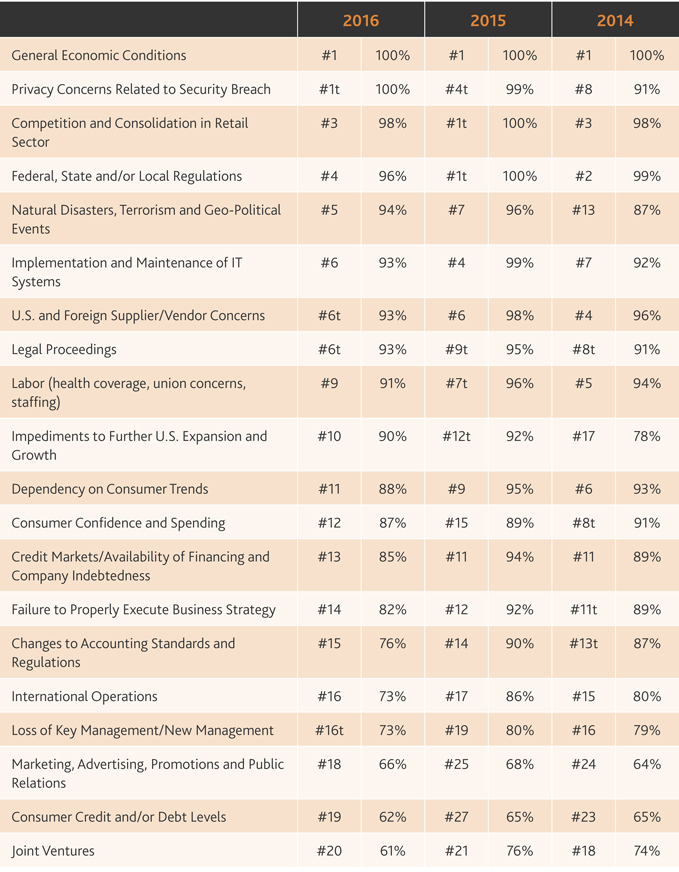 As the cyber threat looms larger, retailers are bracing for new and emerging cybersecurity and data privacy legislation. Risks associated with cyber and privacy regulations were cited by 76 percent of retailers this year. This is in line with the findings from the 2016 BDO Retail Compass Survey of CFOs, in which nearly 7 in 10 retail CFOs said they expected cyber regulation to grow in 2016. These concerns have been highlighted by President Obama’s recently unveiled Commission on Enhancing National Cybersecurity and continued debate in Congress over information sharing between the government and private industry.

Retailers have not escaped regulatory scrutiny. The industry is also subject to Europay, Mastercard and Visa (EMV) standards that bolster credit card authentication and authorization. Industry analysts estimate that just 40 percent of retailers are compliant with EMV standards despite the Oct. 1, 2015 deadline.

“Mandating EMV chip-compliant payment systems is an important first step in shoring up the industry’s cyber defenses, but it’s just the tip of the iceberg,” said Shahryar Shaghaghi, National Leader of the Technology Advisory Services practice group and Head of International BDO Cybersecurity. “Online and mobile transactions remain vulnerable to credit card fraud and identity theft, and POS systems can still be hacked and provide an access point to retailers’ networks. New forms of malware can also compromise retailers’ IT infrastructure and disrupt business operations. Every retailer will experience a data breach at some juncture; the real question is what mechanisms have been put in place to mitigate the impact.”

Impediments to e-commerce initiatives also increased in ranking, noted by 57 percent of retailers in 2016, a significant contrast from 12 percent in 2007. In 2015, e-commerce accounted for 7.3 percent of total retail sales and is continuing to gain market share.

As e-commerce grows and businesses strive to meet consumers’ demand for seamless online and mobile experiences, retailers are feeling the effects in their physical locations. The recent wave of Chapter 11 bankruptcies and mass store closings among high-visibility retailers has raised concerns across the industry. Ninety percent of retailers are worried about impediments to growth and U.S. expansion this year. Meanwhile, risks associated with owning and leasing real estate jumped 14 percentage points to 54 percent this year.

Heightened worries over the impact of e-commerce on physical locations are far reaching, driving concerns over market competition for prime real estate and mall traffic to rise 19 percentage points to 46 percent. Meanwhile, consumer demand for fast shipping fueled an uptick in risks around the increased cost of mail, paper and printing, rising 10 percentage points from seven percent in 2015 to 17 percent this year.

General economic risks have been consistently top of mind for retailers throughout all ten years of this survey. Even at its lowest percentage in 2008, this risk was still the second most cited, noted by 83 percent of companies.

Despite the fact that since 2013, general economic conditions have remained tied for the top risk, concerns about specific market indicators have receded.