A new study by Dimensional Research evaluated the confidence of IT professionals regarding the efficacy of seven key security controls, which must be in place to quickly detect a cyber attack in progress. Study respondents included 763 IT professionals from various industries, including 100 participants from the energy sector. 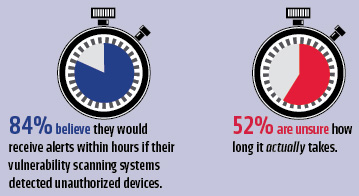 According to the Department of Homeland Security, the energy sector faces more cyber attacks than any other industry. Despite the frequency in attacks, energy IT professionals participating in Tripwire’s survey were very confident in their ability to collect the data needed to detect a cyber attack.

For example, seventy-two percent of energy respondents believe they could detect configuration changes to endpoint devices on their organization’s network within hours, but over half (fifty-two percent) said their automated tools did not pick up all the necessary information, such as the locations, department and other critical details, needed to quickly identify unauthorized configuration changes to endpoint devices that can indicate an attack in progress.

“These results show that most security professionals are assuming they are doing the right things to secure their environments, but lack real world data to back up their assumptions,” said Travis Smith, senior security research engineer for Tripwire. “This highlights the importance of testing security controls to ensure they are functioning as expected. It’s not enough to install security tools throughout the environment. You must test the policies and procedures to be confident the controls in place will stop or detect real-world intrusions.”

“The energy sector has made significant improvements in securing their slice of the nation’s critical infrastructure, but broader adoption of security best practices is still lacking,” said Tim Erlin, director of IT security and risk strategist for Tripwire. “While dedicated security staff are intimately familiar with the deployed capabilities and gaps, IT at large is often working on assumptions of protection.”

When implemented across an organization, these controls deliver specific, actionable information that is necessary to defend against the most pervasive and dangerous cyber attacks. Before any damage is done, it is vital for organizations to identify indicators of compromise quickly so that appropriate action can be taken.