Consumers are more worried about cybercrime than physical world crime, according to Sophos. The survey polled 1,250 consumers in the US, UK, Germany, Austria and Switzerland. 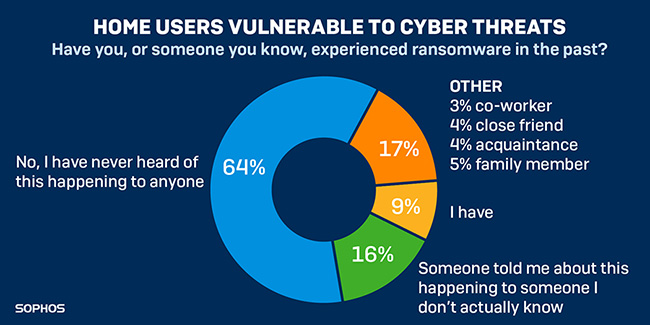 Despite concern for cybercrime in general among those consumers surveyed, awareness of phishing and ransomware remains relatively low. Forty-seven percent, nearly half, are not familiar with phishing or perceive it as a low threat, which is a concern considering phishing is the number one attack method used to gain access to personal information.

“Consumers are the most vulnerable to ransomware, malware and spyware, because unlike at work, they don’t have an IT department looking over their shoulder and handling cyber security as part of a full time job,” said John Shaw, VP, Enduser Security Group, Sophos. “In many households, one person provides ‘defacto IT support’ in the home, as well as for family and friends outside of the home, but that person doesn’t always feel confident that they know what they should be doing or have the time to do it.” 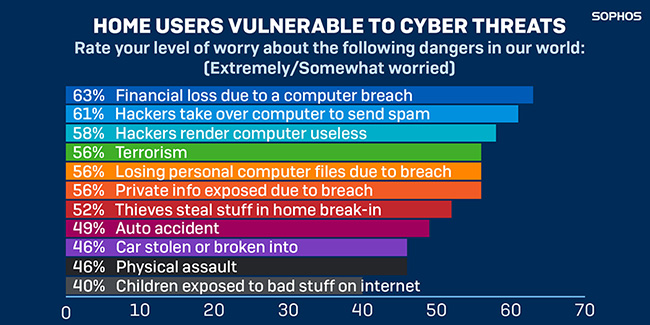 Fifty-five percent of all surveyed said they advise someone else (spouse, kids, friend, parents, extended family, grandchildren and other) on keeping their computer protected from malware and hackers. Of these, 14 percent are not confident that they’ve properly backed up and could recover data after a security breach from a computer they look after for someone else. Eighteen percent sat on the fence, neither unsure nor confident, leaving 32 percent of those who rely on someone else to handle their cyber security potentially vulnerable to a data breach.

“Backing up computers and installing advanced protection for home PCs and Macs are things we should all be doing, like adding a house or car alarm to the locks on your doors. We should also be much less trusting online. Be vigilant about emails – if you are not absolutely sure who sent it and why, check with them first, and if you’re skeptical, just hit delete,” said Shaw.

Additionally, 11 percent are not confident that the computer they monitor for someone else is protected from hackers and viruses, and 14 percent were neither unsure nor confident. This means 25 percent of home computers that are managed by someone else, as surveyed, are vulnerable to cybercrime, including phishing and ransomware.