To be sure that your online browsing is protected and your data is secure, you have to be able to trust the VPN service of your choice. But, as a research into Android VPN clients has recently shown, there are not a lot of them that deserve that trust.

Unfortunately, if we know one thing for sure, it is that average users are very rarely bothered to read carefully the fine print that goes with new software and services they aim to use.

Scammers know this, and know how to react quickly and take advantage of situations, so it’s no wonder that dodgy VPNs and other companies have started bombarding users with offers.

What to be on the lookout for?

Security researcher Troy Hunt recently extensively dissected the scammy approach of MySafeVPN, a service leaves a whole lot to be desired when it comes to security.

Another scammy lunge at tech-unsavvy users is being performed by VoiceFive, a global market research company that has developed and offered for download MyMobileSecure – an “unlimited VPN proxy” – on Apple’s App Store.

But, in order to activate this free VPN app, users must join the MobileXpression research community. And, if they read the company’s privacy policy carefully, they will realize that it will collect much data about the users, their devices, and their internet usage: 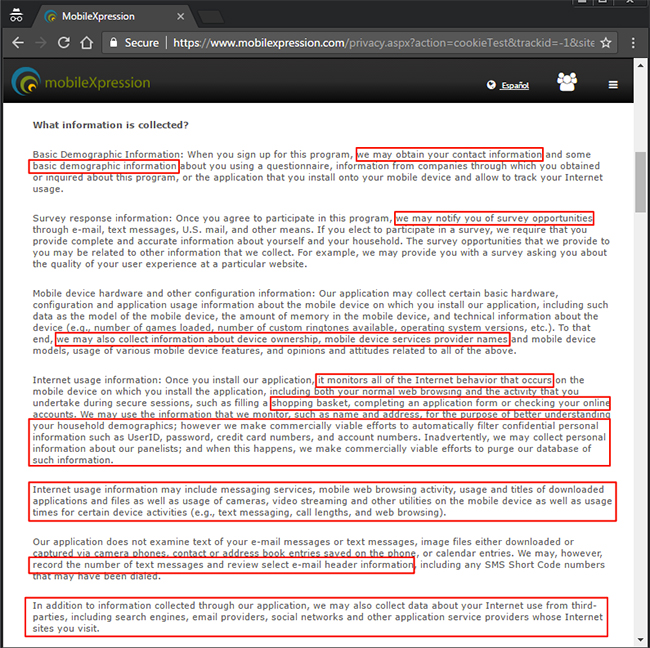 Isn’t that just the thing users want to avoid by using VPNs?

Add to this the fact that the app is being pushed with some extremely scammy tactics, i.e. via a scareware campaign that claims users’ device is infected and that the MyMobileSecure will remove the “viruses”, and it should be perfectly clear that installing this app is definitely not a good idea.

Malwarebytes researchers say that CloudFlare has quickly terminated the scareware domain in question, but it’s likely just a matter of time until new ones pop up.

After Donald Trump’s election to the position of US President and his actual ascent to power, as well as the repeal of certain online privacy protections, many users have chosen to put their trust in digital privacy tools.

Among these, VPN services have definitely noticed an increase of user interest – it’s no wonder, as they have been touted as the right solution for preventing ISPs from seeing which sites users visit and what they do on them.

There are sure to be other scammers that will try to take advantage of this fact, so be careful out there.