Two-thirds of organizations are adapting their technology strategies in the midst of global political and economic uncertainty, with 89 percent maintaining or ramping up investment in innovation, including in digital labor, and 52 percent investing in more nimble technology platforms, according to the 2017 Harvey Nash/KPMG CIO Survey. 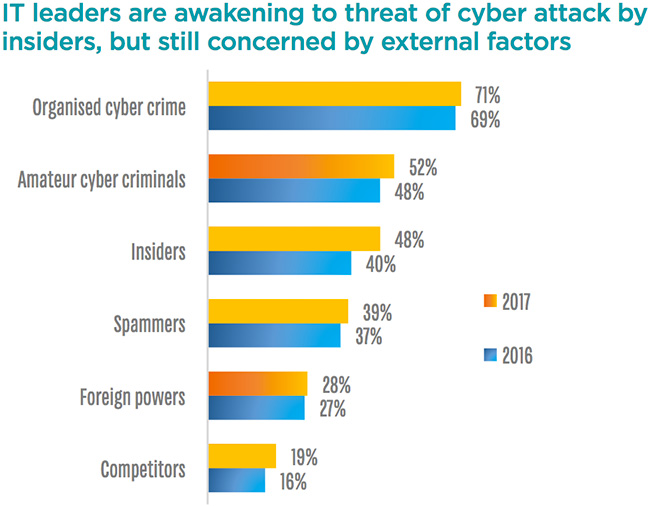 Cybersecurity vulnerability is at an all-time high, with a third of IT leaders (32 percent) reporting their organization had been subject to a major cyber-attack in the past 24 months—a 45 percent increase from 2013. Only one in five (21 percent) say they are “very well” prepared to respond to these attacks, down from 29 percent in 2014. Despite recent headline-grabbing cyberattacks, the biggest jump in threats comes from insider attacks, increasing from 40 percent to 47 percent over last year.

“From an organizational and cultural perspective, the CIO is now faced with a full transformation to digital, enterprise-wide,” said Harvey Nash President and CEO Bob Miano. “Digital is without question the CIO’s priority, but especially for legacy organizations, leading this change to a complete, unified digital strategy is top of mind. CIOs and CDOs are responding by tackling this head-on with innovation and agility.” 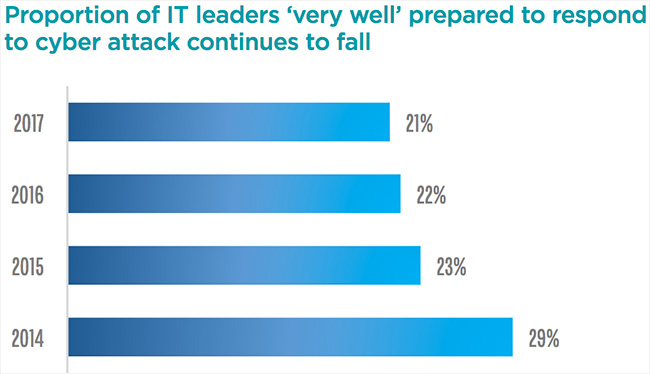 “In order to stay ahead of the unprecedented levels of disruption and change facing today’s CIOs, they have needed to become more strategic and functionally integrated,” said Denis Berry, KPMG principal and U.S. CIO Advisory leader. “Today’s technology executives need to understand how business models impact their organizations’ infrastructure—not only from a technology standpoint but from an economic, social, political and regulatory one as well, especially in order to stay nimble, adapt to an uncertain climate and truly discover where the opportunities are.”

CIOs love their jobs, and are more likely to be involved at the Board level