BitSight analyzed more than 35,000 companies from industries across the globe over the last year, to better understand the usage of outdated computer operating systems and Internet browsers, the time to it took to update operating systems once a new release was made available, and how these practices correlate to data breaches. The data shows that there are large gaps in asset management programs across the globe. 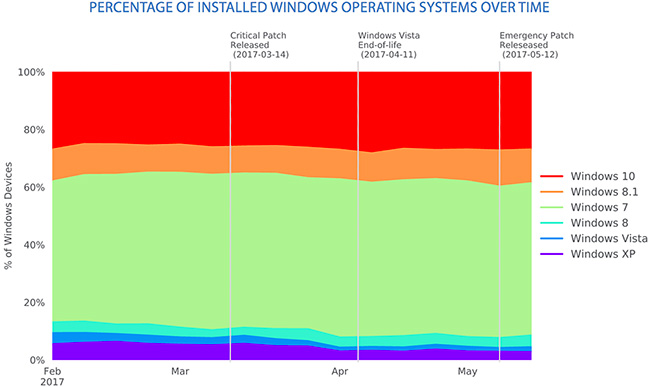 “The WannaCry attack brought to light the threat posed by outdated systems on corporate networks. Our researchers found that thousands of companies across every industry are using endpoints with outdated operating systems and browsers. Research and analysis of organizational endpoint configuration and vulnerabilities suggests that unless companies begin to take a proactive approach to updating their systems, we may see larger attacks in the future,” said Stephen Boyer, co-founder and CTO of BitSight. “Endpoint information can serve as a key metric for executives, board members, insurers, and security and risk teams to understand and mitigate the risks of their insureds or their vendors.”

Using evidence of security incidents from networks around the world, the BitSight Security Ratings Platform applies sophisticated algorithms to produce daily security ratings for organizations, ranging from 250 to 900, where higher ratings equate to lower risk. The foundation of this research is built on the company’s ability to identify machine compromises, configuration and adoption of the latest patches, and user behavior across the Internet; and attribute that information to companies.