Newly released data shows that DDoS and web application attacks are on the rise once again, according to Akamai’s Second Quarter, 2017 State of the Internet / Security Report. Contributing to this rise was the PBot DDoS malware which re-emerged as the foundation for the strongest DDoS attacks seen by Akamai this quarter. 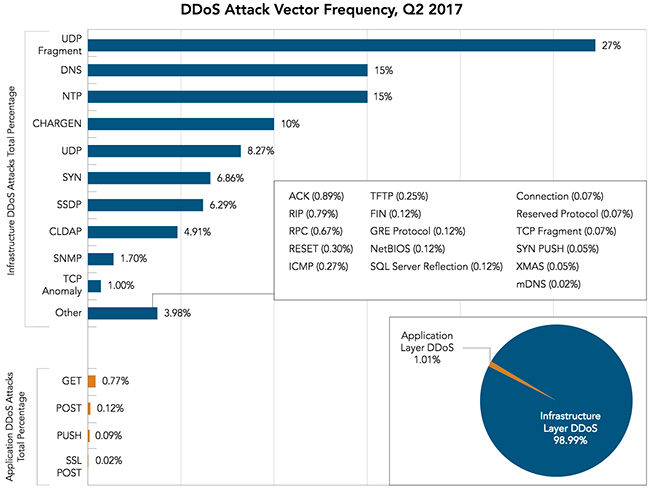 In the case of PBot, malicious actors used decades-old PHP code to generate the largest DDoS attack observed by Akamai in the second quarter. Attackers were able to create a mini-DDoS botnet capable of launching a 75Gbps DDoS attack. Interestingly, the Pbot botnet was comprised of a relatively small 400 nodes, yet still able to generate a significant level of attack traffic.

Another entry on the “everything old is new again” list is represented by the Akamai’s analysis of the use of Domain Generation Algorithms (DGA) in malware Command and Control (C2) infrastructure. Although first introduced with the Conficker worm in 2008, DGA has remained a frequently used communication technique for today’s malware.

“Attackers are constantly probing for weaknesses in the defenses of enterprises, and the more common, the more effective a vulnerability is, the more energy and resources hackers will devote to it,” said Martin McKeay, Akamai senior security advocate. “Events like the Mirai botnet, the exploitation used by WannaCry and Petya, the continued rise of SQLi attacks and the re-emergence of PBot all illustrate how attackers will not only migrate to new tools but also return to old tools that have previously proven highly effective.”

Key findings from the report